Scheduled for the Fort Worth Westerners. 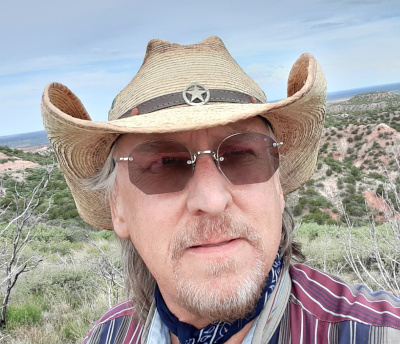 Tom Ashmore and C.A. Maedgen conducted a new archeological study in 2022 to determine the layout of the cavalry sub-post of Fort Clark, Camp Meyers Spring. With over 1,000 hours of research and field work, and using new technology of satellite and drone imagery, as well as terrain reconnaissance and artifact mapping, they were able to determine the layout of the entire encampment, including the Seminole Negro Indian Scout Camp, right down the individual tents. They will present a presentation of their work, showing all of the entire 30 acre camp.

Tom Ashmore spent 21 years in the Air Force as a special intelligence analyst. After retiring as an analyst, he worked as a contractor teaching intelligence skills for the Air Force Intelligence School for 20 years at Goodfellow AFB, Texas. As a member and vice president of the Concho Valley Archeological Society, he headed up archeological investigations of Butterfield's Overland Mail's Johnson's Station in Irion County, Grape Creek Station in Coke County and Horsehead Crossing Station in Crane County. He also headed up investigations of Paint Rock 1800s Historic Camp Sites in Concho County; Tower Hill Military Lookout in Sterling County; and ancient rock shelters in the Lower Pecos region of Texas, working with both Conch Valley and the Iraan Archeological Societies. He completed a book in 2019 on his Butterfield Trail investigations, The Butterfield Trail Through the Concho Valley and West Texas. He is currently a member of the Iraan Archeological Society and the Southwest Federation of Archeological Societies (SWFAS). He has written several articles for Desert Tracks publications and SWFAS transactions over the years.

C. A. Maedgen, a geologist, is also an amateur archeologist and photographer. He began taking photographs while stationed in Vietnam when he served there in the Air Force, and now focuses primarily on birds and wildlife.